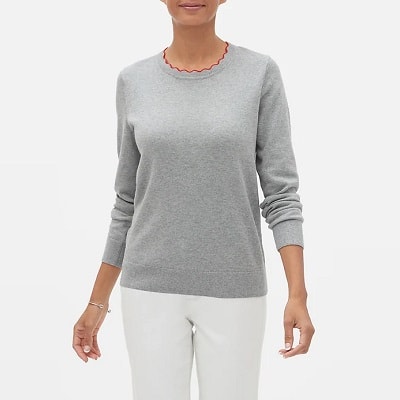 I really like this sweater with a fun scalloped neck detail. I like that the body and sleeves of the sweater do not have any pattern or embellishments and that it is offered in several colors. The shape itself is also classic, without drop shoulders or crazy sleeves, and it’s longer in length. I like how the scalloped neck has a contrasting color on the edges to draw attention to the face. While I am talking about sweaters, I’m going to ask you a serious question that I’ve been pondering: Does anyone in real life tuck their sweaters into pants or do the fashion blogger thing where you tuck just the front edge of a sweater into your jeans? I’d love to know if people are pulling off this look in real life or if it’s just done for photo styling. This sweater is available at Banana Republic Factory for $24.99–$34.98, depending on color. Washable Forever Scallop Crew-Neck Sweater

« Washable Workwear Wednesday: Twist-Front Button-Up Top
Tales from the Wallet: Couples’ Finances… Before and After Kids »

« Washable Workwear Wednesday: Twist-Front Button-Up Top
Tales from the Wallet: Couples’ Finances… Before and After Kids »