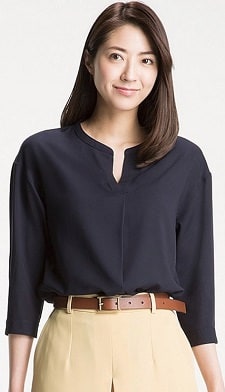 Happy Tuesday! I was intrigued to see a reader give a shoutout to this VERY affordable blouse as “my unicorn post-partum work shirt” in a recent comment — as she noted:

It has everything – flowy in the torso, lose enough that you can lift it to pump, dark colors, wears like iron, works with pants/skirts/suits. It looks fine straight from the dryer, and if you have a steamer you can make it look even better. And it’s on sale!

Indeed it is — there are three colors left in sizes XXS-XXL for $14.90 (originally $29.90). NICE. Rayon Skipper Collar 3/4 Sleeve Blouse Readers, did you have a “unicorn post-partum work shirt”? What were you looking for in one — and did you find it?  Psst: Looking for more info about nursing clothes for working moms, or tips for pumping at the office? We’ve got them both… This post contains affiliate links and CorporetteMoms may earn commissions for purchases made through links in this post. For more details see here. Thank you so much for your support!

Hunting for great deals on family holiday cards? As of 11.25.22, these are the best deals we’re seeing on cards and more: