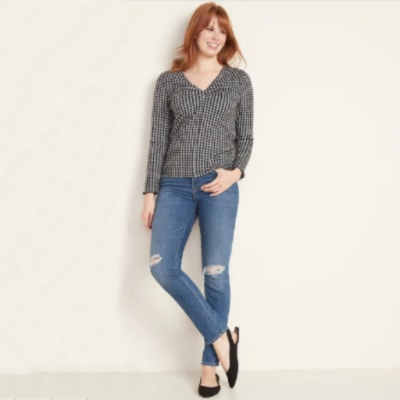 This is a cute top to wear on its own or under a blazer. I like wearing tops under blazers that have some interest around the neckline that the lapels of the blazer will frame. This seems like an inexpensive and fun option that includes that element. The V-neck that ends in a twist at the deepest point in the V is flattering and keeps this top from being just a regular long-sleeved t-shirt. My favorite print option is the black-and-white gingham, but all of the colors are on sale right now at Old Navy for $18–$22 (marked down from $24.99). Soft-Brushed Twisted V-Neck Top

« Washable Workwear Wednesday: Connie Jersey Top
Do You Eat Dinner With Your Children? »

« Washable Workwear Wednesday: Connie Jersey Top
Do You Eat Dinner With Your Children? »