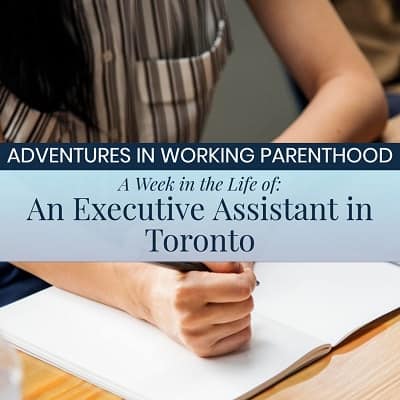 For this week’s installment of our Week in the Life of a Working Mom series, I’m happy to introduce CorporetteMoms reader Amanda, who lives in Toronto with her son and works as an executive assistant. Our usual caveat applies: Please remember that this is is a real person who has feelings and isn’t gaining anything from this, unlike your usual friendly (soul-deadened, thick-skinned, cold-hearted, money-grubbing) blogger — so please be kind with any comments. Thank you! — Kat

If you’d like to be featured (anonymously or otherwise), please fill out this form! You can see all posts in this series here.

First, Some Basics About This Working Mom…

A Week in My Life

My toddler (“L”) wakes around 6:30 and I convince him to snuggle me in bed for another hour. Let him climb all over me for another half hour before we get out of bed. Leisurely breakfast, and we go to a moms’ healthy lifestyle-themed market. Come home for lunch and a nap. His father (who lives on the other side of the country) is in town for work, so we run some errands and then meet him at a playground for some family time. Back at home I make dinner for L and I. Some playtime and a bath follow before his bedtime. Before I go to bed I do some tidying in the kitchen and cook a stew for lunches and freezer dinners. Got no housekeeping done all weekend, but it was worth it for the wonderful playtime with L. I never have time to do more than the basics during the week, so I’ll have to work extra hard the following weekend to get things like the mopping and bathroom done.

We asked A whether she always cooks weekday lunches and dinners on Sundays:

I actually like to spread it throughout the week! I’ll do prep work the night before and cook 2–3 times a week. The other nights, we eat from the pre-prepped stuff in the freezer. One-pot/pan dishes are amazing for this. I have a few go-tos that I don’t keep recipes for; they are all skillet dishes, including a sweet potato and sausage hash; a spaghetti squash with meat sauce; and a taco, slaw, and ramen thing.

Back to the workweek today. As usual, L wakes around 6:00 and I bring him into bed with me to snuggle in order to catch a little more sleep. I probably wouldn’t be able to do that if his father and I were still together — but if we were still together we’d be able to take turns getting up with him, so I guess it evens out. We have our typical rushed morning getting dressed and having breakfast — although at least I was organised enough to have overnight oats prepped. I cycle to work and drop L off at daycare on the way, pulling him in a bike trailer. We manage to get out the door around 7:45. Work is typical, though with a few more meetings than usual. I squeeze my workout in on my lunch break, and head out around 5:00 p.m. Daycare pick-up needs to happen before 6:00 p.m. We get home around 6:15, and dinner is a defrosted freezer meal. While it heats up, we have some playtime, and L finally goes to bed around 8:30. After he goes to bed I prep our lunches and pack my bag for the next day while running some laundry. Our washer/dryer is small and only fits about half a basket, so I’m generally running laundry four nights a week. Zone out in front of the TV for a bit, and then crash into bed around midnight.

Tuesday looks a lot like Monday. In fact, it’s nearly identical until after work. It’s the last week of L’s swimming lessons, so he has a sandwich for dinner and we go to the pool for his 7:15–7:45 p.m. swim lesson. He got his report card this week and passed into parent-and-tot 3. I’ll sign him up for that in the fall. Home for a snack and his bedtime. Bedtime routine has gotten really goofy the past month or so. He loves to run around naked and play “try to catch me,” so he’s usually in bed much later than he should be. It’s no wonder I get to bed so late; after prepping lunches and bags I still need some time to decompress with a book or TV show.

L’s dad is still in town for work, so he’s agreed to take L for an overnight tonight since I have a 9:30 p.m. soccer game. Usually my mom or ex-MIL babysits while I play. I drop L off at daycare in the morning and I won’t see him again until Thursday pickup. After work, I treat myself to dinner at a restaurant near my office and a mini shopping spree (where I buy only things for myself for the first time in at least two years) before going to my soccer game. By the time I get home it’s past 11:30 and I still need to prep for the next day and shower and decompress. I don’t get to bed until after 1:00 a.m.

A told us more about playing soccer:

I am actually answering this question in my soccer gear, we just finished a game. I’ve played since I was a little kid, with some breaks, but my adult self has been playing continuously for a decade. Minus the second half of my pregnancy and the first four months postpartum.

Woke up this morning feeling sick, with a wicked headache making it hard for me to get out of bed. Since my office has an agile office situation and the executives I support are all travelling today, it’s an easy decision to work from home. I set up my office on the couch and get as much done as I can with the difficulty focusing that comes with a headache. Hop on the bike just after wrapping up at 5:00 p.m. to pick up L. He’s very happy to see me, and as usual when his father dresses him, his clothes don’t match. Better than last time though, when he was wearing a pyjama top with khaki pants. I forgot to take meat out of the freezer, so we had a frozen pizza for dinner, and since I didn’t have to travel from downtown we had an extra half-hour of playtime before bed.

Back to the usual routine of waking up when L wakes and snuggling him for some extra snoozing, rushing through getting dressed and having breakfast, and commuting in to the office. Work and daycare pickup go smoothly, and bedtime is the typical goof session. We FaceTime my parents for a little chat, and L plays peekaboo and kisses the iPhone when my mom asks him for a kiss. He’s a charming kid, and extremely easygoing and mellow. Life is hard when you’re juggling a full-time job and parenthood by yourself, but it would be so much harder if my baby had a difficult temperament. I don’t have to do any prep work for the next day, so instead I open a bottle of wine and binge on some Netflix.

We asked A to tell us the hardest thing for her about being a single mom:

I’m not sure I can drill it down to one particular thing. I think for me personally, it’s the lack of people in a peer group. My few closest friends are child-less, and the parents that I do count among my friends and acquaintances are all partnered up. I feel isolated and left out of a lot of things.

I wish L would sleep in later. My ex swears up and down that he sleeps for hours and naps perfectly when he’s with him. L has his own junior membership at the gym, in order to attend the daycare there while I work out, so we do that in the morning. Head home for lunch, and he falls asleep in the car, much to my chagrin. I try to transfer him to his crib for a nap, and I think I’m successful, but five minutes later he’s crying. So I give him lunch and put him down for a nap again, but it takes a half hour and two times checking in for a mini-snuggle before he falls asleep. He sleeps for about an hour and a half, which is good when he’s with me. Allegedly he’ll sleep for 3+ hours when he’s with my ex. I joke with my friends that he knows that time passes quickly when he sleeps, so the longer he sleeps there, the sooner he’ll see me again. It gets me through the times I miss him. We have an anniversary party to attend later in the afternoon, and en route we stop to pick up a bottle of wine for a gift. I manage to lock my keys in the car, so I call CAA to come and open it up. They’re pretty quick, thank goodness. L isn’t often in large groups where he doesn’t already know people, so I’m surprised to learn that he’s hit a stage where he’s shy around strangers. But he eventually opens up and spends a good deal of time toddling around with the other boy at the party. We only recently moved back to this city, and it’s been a couple years since I’ve seen most of the people there. Attending it is like my “comeback,” wherein I reveal that I’m back in town and that my relationship recently failed. It’s bittersweet.

Thanks so much to Amanda for sharing a bit of her life as a working mom! Readers, what’s your biggest takeaway from her week of work as an executive assistant as well as her general work/life balance? 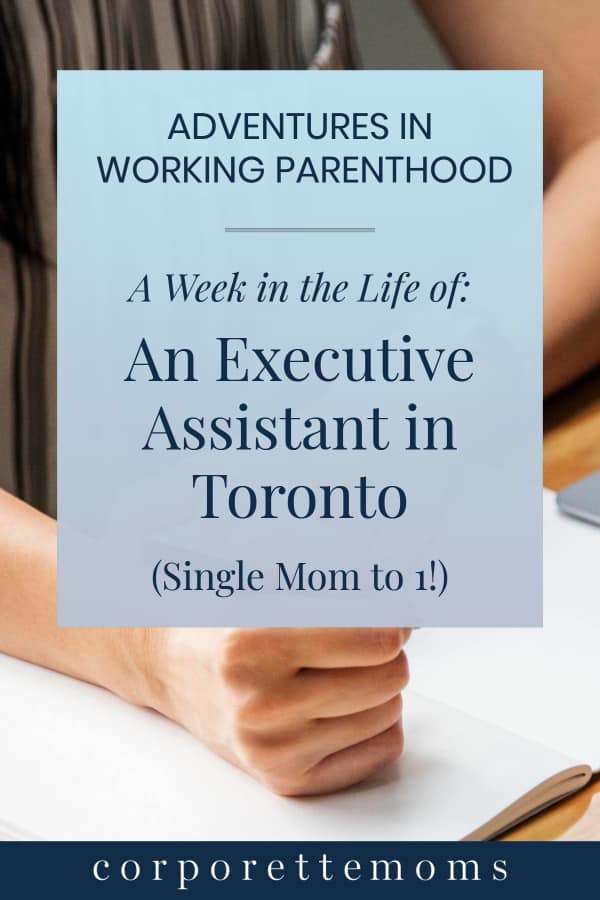