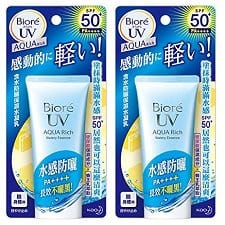 Readers have been singing the praises of this sunscreen, and it’s my favorite — give it a try if you’re looking for a lightweight daily sunscreen to go on top of your moisturizer. It’s SPF 50. There’s a great blog post from Fifty Shades of Snail about why Asian beauty brands are so much better for sunscreen — it’s an interesting read and I haven’t looked back since. Biore Sarasara UV Aqua Rich Watery Essence Sunscreen SPF50 (Psst: I’ve seen some commenters on Corporette noting that there are bad reviews of newer versions of the sunscreen, so you should pay attention to the color of the bottle you get — I’ve always gotten this light blue bottle and have been happy with the feel of the product and presume it’s working fine as a sunscreen.) This post contains affiliate links and CorporetteMoms may earn commissions for purchases made through links in this post. For more details see here. Thank you so much for your support!

Hunting for great deals on family holiday cards? As of 11.25.22, these are the best deals we’re seeing on cards and more: