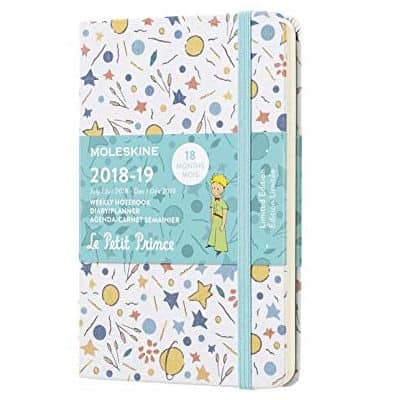 I recently ordered a weekly planner after a discussion with my mother-in-law. I was telling her about some of the funny things my son has said recently, and she laughed and said, “You really should be writing these down!” After tossing that around in my head for a few weeks (this is how my brain works now — I get around to taking action on thoughts with a 3- to 4-week lead time), I finally ordered a planner. My goal is to write down at least one funny thing he says, either just the quote itself or maybe with a tiny bit of context. I don’t want this to become a chore or something unwieldy, but I don’t want to forget some of these random things that make me laugh and give me a bit of an insight into how his brain is working. I also would prefer to have them written down and not saved electronically, because I’d love to keep them as a memento and see them in my own handwriting. (You may also want to check out our post on remembering the little things.)  This Moleskine weekly planner is $18.40 on Amazon and eligible for Prime. Pocket Size Planner

« How Does Your Partner Support Your Career (And How Do You Support Theirs?)
What Kind of Family Vacation is Right For You? »

« How Does Your Partner Support Your Career (And How Do You Support Theirs?)
What Kind of Family Vacation is Right For You? »