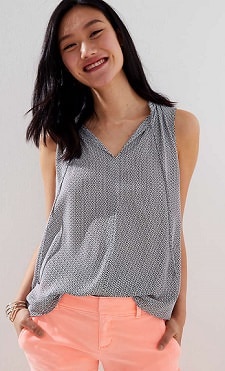 I am always on the lookout for tops like this one, which become staples of my work wardrobe. The pattern is unobtrusive and somewhat forgettable (which is a good thing); it’s a neutral color that can be worn with a navy, gray, or black suit; and it has an interesting neck detail. I know I’m not going to win any fashion awards wearing it, but I don’t have to put in much thought when picking it out in the morning. Also, I like this style because it has a floaty cut to it that plays well against a more structured suit, not to mention hides my midsection. It’s $44.50 at Ann Taylor Loft. Petaled Ruffled Tie Neck Mixed Media Shell Nordstrom has a plus-size option. Looking for other washable workwear? See all of our recent recommendations for washable clothes for work, or check out our roundup of the best brands for washable workwear. This post contains affiliate links and Corporette® may earn commissions for purchases made through links in this post. For more details see here. Thank you so much for your support!