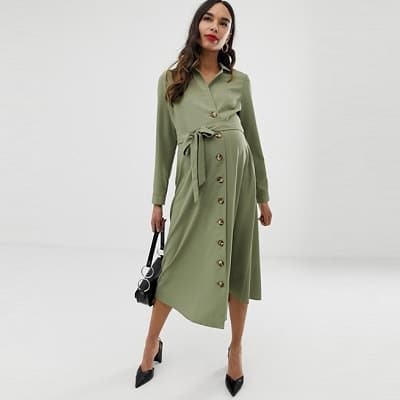 I like this maternity dress from ASOS for a few reasons. First, the tortoiseshell buttons all the way down the front are oversized and play with proportions a bit to add some interest. Next, I like how it’s full coverage — full sleeves, midi length, with a collar. Also, I personally love the army green/khaki color, which I think is universally flattering. In the little video of it on the site, it looks like it has a nice drape and flow to it. This dress is $56, is eligible for free shipping and returns, and is available in sizes 2–16. Midi Shirt Dress with Buttons