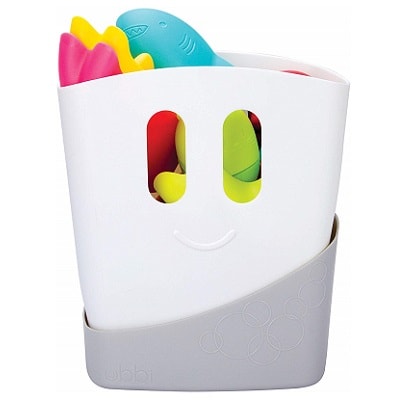 We received this bath toy organizer as a gift from a friend who loved having it for her own son. I can say that I also love having it. My son loves taking baths, and for him, the more toys the better. Sometimes we have a “toy party” bath and we dump allll the toys in, and you can’t even see the surface of the water because we own so many bath toys. One of the ways we combat moldy toys is by using this organizer. The bottom of it has drainage holes like a flower pot, and it fits into a tray that catches the water. Then you can remove the bucket part and dump out the water that has collected in the tray. I like this system better than the kind that suction cups to the side of the bathtub, but I think I am cursed to never have a suction cup ever work for me. The organizer is $19.16 at Amazon and eligible for Prime. Bath Toy Organizer

« Where Have Your Best Mom Friends Come From?
How Have Dinner Parties and Other Social Events Changed Since You Had Kids? »

« Where Have Your Best Mom Friends Come From?
How Have Dinner Parties and Other Social Events Changed Since You Had Kids? »