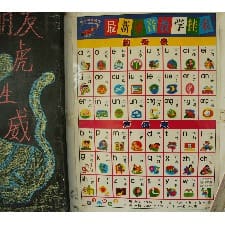 I still remember the big day in 6th grade that we got to choose the foreign language that we’d start learning: Spanish, French, or German. (I picked Spanish.) Many schools in the U.S. still don’t begin to teach kids a new language until middle school, while most European countries, for example, start instruction of a second language when kids are six to nine years old. Here are a few reasons why it’s beneficial to start language learning sooner rather than later:

Over at Corporette, we recently talked about ways to learn a foreign language as an adult, so we thought it was a good idea to talk about language-learning for kids, too. If you or your partner don’t speak a second language and neither do your parents/in-laws, here are a few ways to teach kids a new language:

Enroll in an Immersion School to Teach Kids a New Language

Try these methods to find a bilingual nanny or babysitter, whom you can ask to speak to your child only in a certain language, or in that language in addition to English:

Here’s a NYT article about parents searching for bilingual caregivers.

How to Teach Kids a New Language: Home Language-Learning Products

Here are a few options for products that promise to teach kids new languages:

Is your child learning a second language? Can you speak the language he or she is learning, i.e., will you be able to help? Is he/she learning at school, through an outside class, with a language-learning product, or with you or another family member? Do you have any bilingual/immersion schools in your area, and have you considered enrolling your child in one?

Editor of Corporette/CorporetteMoms since 2014, Kate lives in Rochester, NY, and has one son (born June 2010). A cat person and Oxford comma loyalist, she loves Ben & Jerry’s Phish Food and her Vejas.