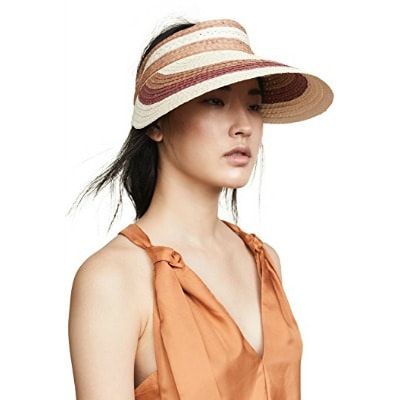 I am a little obsessed with the idea of rocking a straw sun visor at the beach and pool this summer. I think I discussed here before how I am a shade worshipper, but I also do love being outside in the summer while fully covered up and protected. I own one or two straw beach hats, but I find that having my head fully covered in the sun makes me uncomfortably hot. Enter the sun visor. The top of your head isn’t covered up, you can wear a higher ponytail, and this one looks to provide the same face coverage as a hat. I like the color combos, and it doesn’t look completely uncool. This sun visor is $80 and is available at Shopbop. Summer Stripe Visor

This Vince Camuto option is only $22 on sale at Zappos.

« Week in the Life of a Working Mom: Associate Professor in Norway
News Roundup »

« Week in the Life of a Working Mom: Associate Professor in Norway
News Roundup »