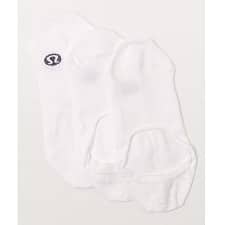 These socks were a recommendation to me from my sister, and I’ve since bought several pairs and never looked back. I had a little bit of sticker shock at first, but they’re totally worth it! My footwear of choice on the weekends are sneakers, and I’ve always been hunting for low-cut socks to wear with them. These are hidden socks that actually stay put on your foot — they have these little rubber stripes on the inside of the heel that keep them from slipping off into your shoe. If I could find the person who invented that, I’d give them a big hug. I have washed all of my pairs several times and they are holding up well, but I do recommend that you put them in a laundry bag because they’re tiny and can get easily rolled up within your other laundry. A 3-pack is $38 at Lululemon. Secret Sock, 3-Pack