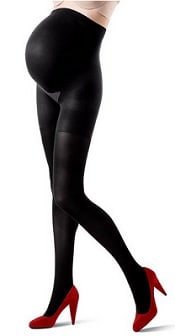 Hmmn: I am slightly alarmed (for you guys, at least) that my favorite pair of maternity tights — ASSETS by Sara Blakley — seems to be really hard to find right now. Amazon still has them, though, so stock up. Ladies, which are/were your favorite maternity tights?  The tights are $18 (plus shipping, alas) at Amazon. ASSETS by Sara Blakely Marvelous Mama Terrific Tights Edited to add: D’oh, of course they’re available at Target, which may even be where I bought mine originally…