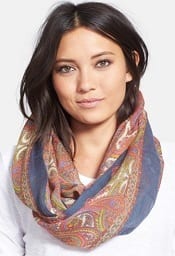 I always think of infinity scarves as being a great addition to a breastfeeding/pumping mom’s wardrobe — you can use them for extra coverage while you’re pumping, a pattern (such as this vibrant paisley) hides milk stains and other baby stains (spit up, sticky fingers, etc.), and is an easy way to add color and variation to what may be a limited wardrobe as you work to get back into your pre-pregnancy clothes. I like this vibrant paisley scarf, available in blue and orange — it was $28, but is now marked to $18.75 (and it is machine washable). Tasha ‘Vibrant Paisley’ Infinity Scarf