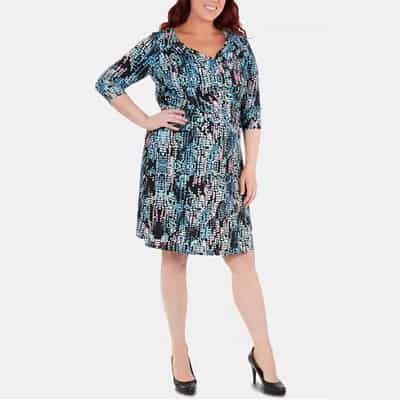 This is a cute and flattering dress from NY Collection, available at Macy’s. I like a lot of elements of this dress — the unique neckline (the website description calls it “sweetheart,” though I don’t necessarily agree), the ruching, and the fun pattern. I like that the pattern is called “Aqua Partydot,” and it seems pretty apt. I can picture playing up the pink with a fun pair of pink shoes, or toning down the pattern by throwing a black blazer on top. This dress is available in sizes 1X–3X and is currently on sale for $34. The same print can be found on a somewhat similar NY Collection dress that comes in sizes S–XL and is on sale for $47. Printed Ruched Crisscross Dress