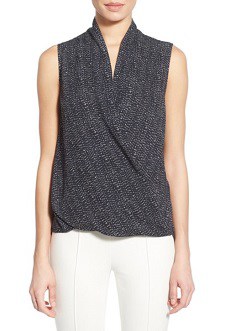 Hooray, it’s nice to see everyone’s favorite nursing/pumping/general-blouse-love shirt back in stock, and in a ton of new prints and colors. I like this black-and-white scattered dot pattern (all the better for hiding random kid-related stains), and the price: it’s $58, available in sizes XS-XL. Pleione Sleeveless Faux Wrap Blouse Here’s a plus-size option. (L-3)

Hunting for great deals on family holiday cards? As of 12.6.22, these are the best deals we’re seeing on cards and more: