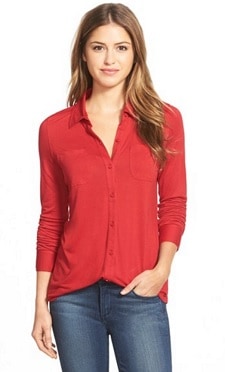 Knit shirts can be a bit hard to find, so I took notice when I saw this lovely Caslon blouse on sale at Nordstrom. The t-shirt material says to “hand wash,” and the buttons would be great if you’re nursing and/or pumping and prefer something blouse-like. I like the red best, but it also comes in four other colors. It was $58 but is now marked to $34 in regular and petite sizes. Caslon Long Sleeve Knit Shirt (L-2)

Hunting for great deals on family holiday cards? As of 12.6.22, these are the best deals we’re seeing on cards and more: